The JA program was introduced to our high school in February 2010. Together with 10 other classmates, we formed our company in April 2010 and by mid-October that year, we had won the JA National Company of the year, Best Green Strategy and business plan including a trip to represent Uganda in Accra, Ghana the next year in 2011 for the JA Africa Competition. Much as we learnt a lot of new business terms and actually put it into practice, the most thrilling and heart-warming experience to this day was when in 2011, Nassuna Maria Goretti, a nine year old girl then walked into our lives.

In preparation for the 2011 JA Africa competitions, we decided to have a Corporate Social Responsibility (CSR) program. As the Human Resource Manager, I happened to meet Stephen Kyamanywa, my former teacher of English in Primary school who had recently been
transferred to a primary school, a stone’s throw away from my high school. He told me about Maria, who was academically talented but whose family faced financial challenges. I informed my colleagues and we then decided to use some of our profits to clear her school fees and buy her uniforms and other scholastic materials.

In 2012, together with other student owned companies, we formed the first JA club in school and I was elected president. Due to the looming national final examinations, we decided to put our magazine production on hold. This was a hard decision as we had developed a strong bond with not only Maria but also her family most especially her mum who on several occasions would pick her report card and
come to our school with a broad smile to show us her daughter’s academic progress! (She would even wait till we finished classes, if she failed to send a note to any of us through the school secretary notifying us of her presence). Since I was President of the school’s JA Club and most of our co-founders were now senior prefects including the Head Prefect we decided to create a school fund, funded by students (1200 at the time) at will to pay Maria’s education fees. Basically, the club executive that changed after a one year term would move around classes to collect this money and keep it with the school bursar. The head teacher at the time, Edward Bukenya agreed to our proposal. Even after our co-founders completed high school in 2012 and 2013, subsequent JA club executives ensured that Maria continued and completed her primary education.

In late 2015, Maria finished her primary education and passed highly. As the founding members, my colleagues and I were able to secure her a secondary education scholarship at Namirembe Hillside with the help of Mr Gordians Ahaisibwe who had been the Patron
overseeing the introduction and success of the JA program in our school. Currently in form 3, Maria still dreams of being a doctor one day and while her mum suddenly passed on in September 2012, she has still managed to soldier on till now.

After the JA Africa competitions, and while president of the club then, our sole responsibility was to nurture and mentor other younger students to start their companies from scratch and go through the month long program. It was always fulfilling when student companies won accolades and others went on to use their experiences to attain scholarships in institutions like the African Leadership Academy, University of British Columbia, New York University Abu Dhabi among others. The main reason I shared this story is for you and your team to better understand the power that JA programs have in changing and impacting lives.

JA gave us a sense of responsibility, skills, mentorship and valuable meaning to our lives especially in our journey as leaders. One of the best contributions, an adult can do for a child is to give one an opportunity to build up one’s confidence in one’s abilities. For when that happens, no problem can remain too big to remain unsolved and indeed JA gave us that. 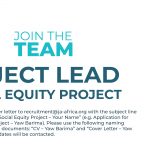 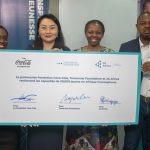